This grand of a typical southern german design represents the sound culture of Mozart's youth. It was used in a former inn in Tannheim (Bezirk Reutte/Tyrol). In 2011 this instrument of important cultural value which showed multiple traces of DIY tampering in the past, was documented in our institute for free.

At an early stage of our research a great similarity to a comparable instrument of slightly smaller dimensions and compass was apparent which had been acquired in 2009 by the National Music Museum in Vermillion (SD, USA; NMM 13010). This piano has been built by the Regensburg maker Franz Jacob Späth (also: Spath) in 1767 and modified soon thereafter.

Our documentation revealed further similarities and slight differences and enabled the Tannheim instrument to be ascribed to Franz Jacob Späth.

Mozart wrote in a letter to his father in 1777: „Ehe ich noch vom Stein seiner Arbeit etwas gesehen habe waren mir die spättischen Clavier die Liebsten. (Before I ever saw anything of Stein's works the spättian keyboard instruments were my favourites)“ (Hintergründe zum "spättischen Clavier"). Franz Jacob Späth's pianos, however, were an unknown entity until recently. Only with the discovery of the Vermillion instrument, followed by this second Späth piano, the importance of these early grand pianos and their technical elements can be properly estimated.

The action resembles an obviously rather common southern German type of simple action without escapement, related to Schröter's design of 1720. A peculiarity of both instruments, maybe typical for Späth, is the internal construction with transverse bars transmitting the string tension and the vibrations of the soundboard to the base board and the frame. Johann Andreas Stein who worked in the Späth workshop for about one and a half years used this assembly in some of his own instruments as well (Berlin, Leipzig 171, Munich BNM).

Späth has shown to have been a rather innovative mind who shortly after mid-century developped quite a number of new designs and never forgot to arouse public attention..

In 1751 already he announced a new instrument with 30 mutations, 1770 his "Clavecin d'amour," probably the first version of a tangent piano (see the article below), a combination of harpsichord and tangent piano, and in 1779 a two-manual combination of piano and harpsichord. Over the following years he exported instruments to Vienna and Paris (Wolfgang Amadé Mozart, der Clavierspieler I: Die Tasteninstrumente auf den überlieferten Bildern Mozarts 3) Michel-Barthélemy Ollivier (1712 – 1784), Le Thé à l’anglaise ...). In 1783 a piano resembling the Tannheim grand was offered in a newspaper ad, thus giving an indication when the technical features of this instrument were on demand.

Despite the rather few instruments preserved,  Späth appears, as well as Christian Ernst Friederici in Gera, to have been one of large scale manufacturers of grand pianos in the period of the gradual shift from the harpsichord to the piano. His workshop obviously could produce a multitude of instrument models with various mechanisms, different shapes and combinations. So also a kind of admiration for such a variety of "Späth's keyboard instruments" may have contributed to Mozart's positive judgment. 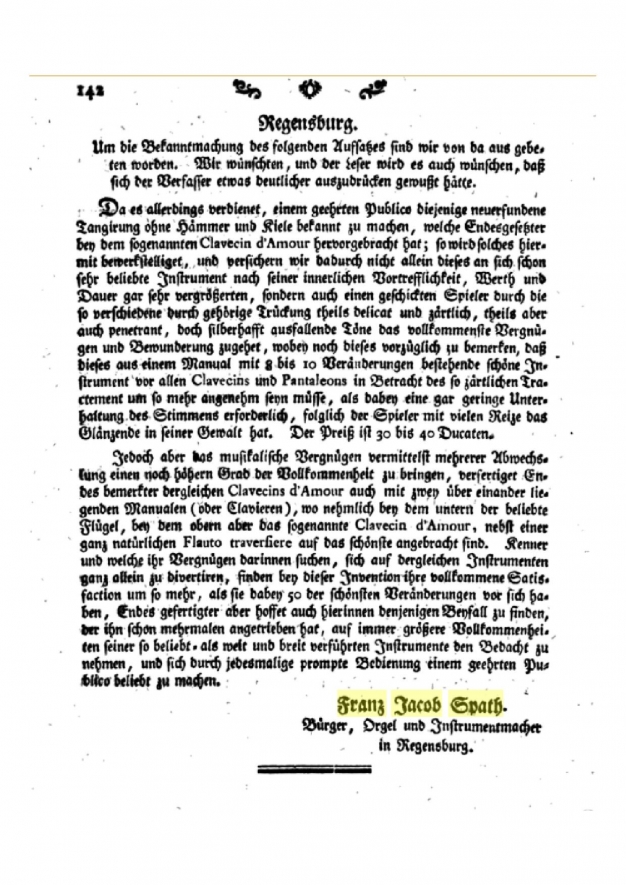 We have been asked to publish the following letter from there. We wished, and so might the reader, that the author would have made his intentions a bit clearer.

Since it appears worthy to reveal to a benevolent public the newly invented action without hammers or quills which has been produced by the author in the so called Clavecin d'Amour this is done and we herewith assure that this already very popular instrument by its internal perfection, its worth and durability has been very much enriched but also offers the skilled player by the different pressure multiple delicate, tender, partly penetrating too, but silvery sounds receiving the most perfect pleasure and admiration, thus this beautiful instrument of one manual with 8 to 10 mutations should excel of all harpsichords and pantaleons [pianos] the more in regard of its tender treatment since a very low effort of tuning is required, so the player has with a lot of charm the stirring fully at his avail. The price is 30 to 40 ducats.

But for achieving an even higher grade of perfection in musical pleasure the author produces these Clavecins d'Amour also with two manuals (or keyboards) above another, the lower being the popular harpsichord, the upper the so called Clavecin d'Amour, including a most natural sounding Flauto traversiere most beautifully. Connaisseurs and those who look for their delight in solitary divertissement on those instruments, will find their perfect satisfaction even more as they 'll find 50 of the most beautiful mutations. the author but hopes to find the applause that has driven him to take care for even greater perfection of his so popular as well as far spread instrumentents and to find acclaim of a honoured public by quick delivrance.

This "Clavecin d'amour" mit "neuerfundene[r] Tangirung ohne Hämmer und Kiele" is possibly the first record about the existence of the tangent piano and thus deserves interest. The term "... d'amour/d'amore," familiar to a musical public by Viola d'amore, Hautbois d'amour, Flauto d'amore, Clarinetto d'amore etc. obviously created a positive association of a tender and sweet timbre, charming sound and emotional appeal and was to bring special attention to the newly invented instrument, but rather was forgotten even sooner than the instrument itself. The not identical "Cembal d'amour" by Gottfried Silbermann, a clavichord with strings of double length struck by tangents exactly in the center, had a similar fate. (see picture below)

Our documentation of the Tannheim grand formed the basis for a reconstruction built by our "Spath work group" Magdalena Balk, Marlis Dörhöfer and Helmut Balk. 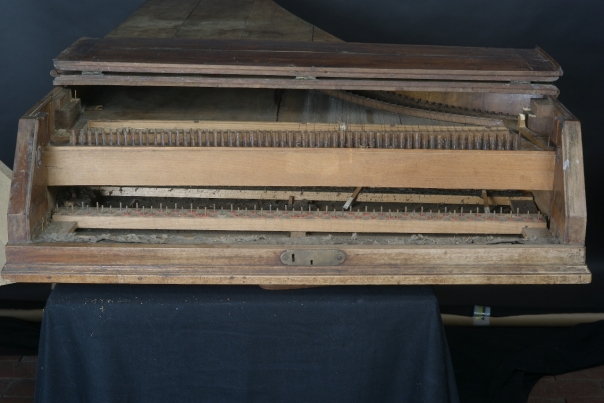 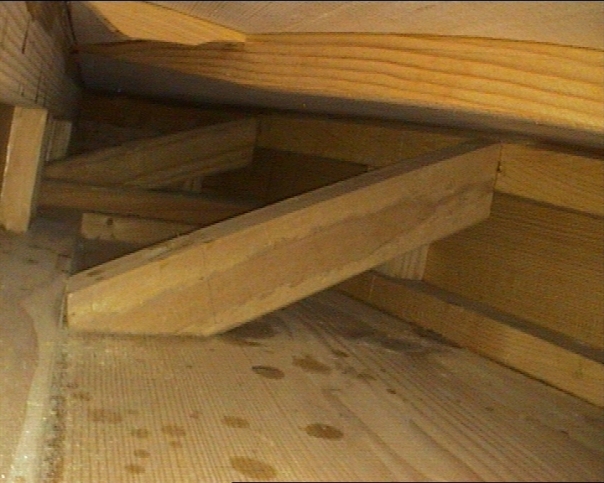 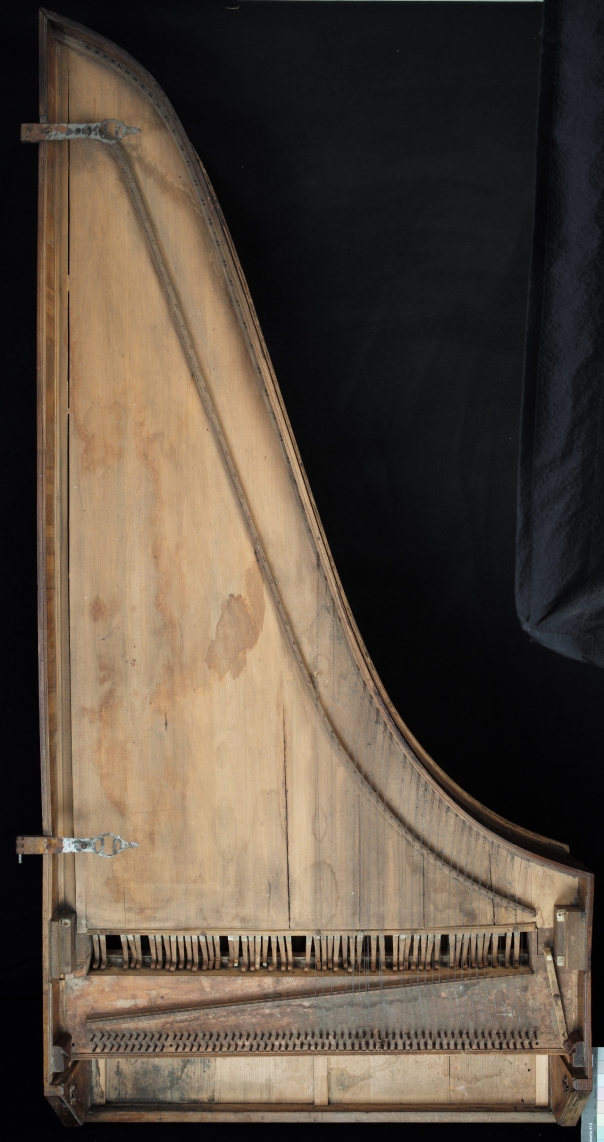 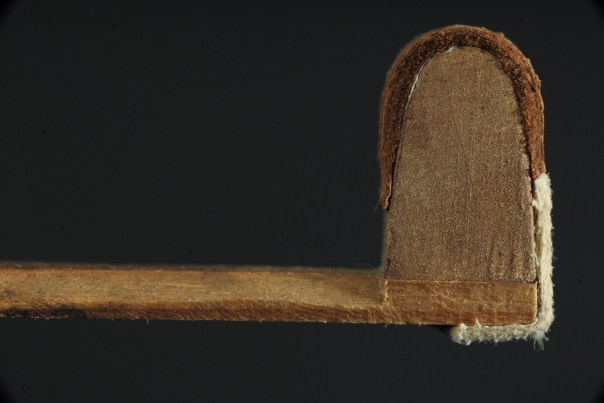 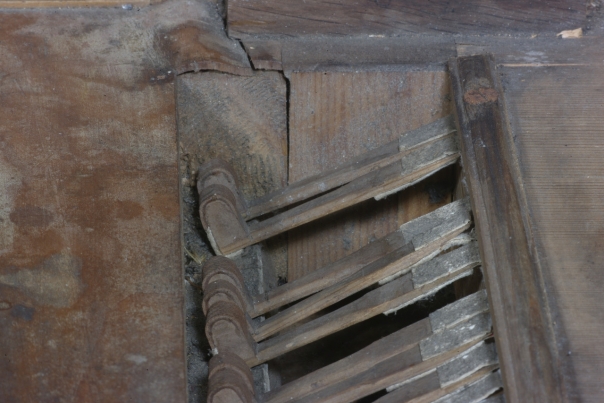 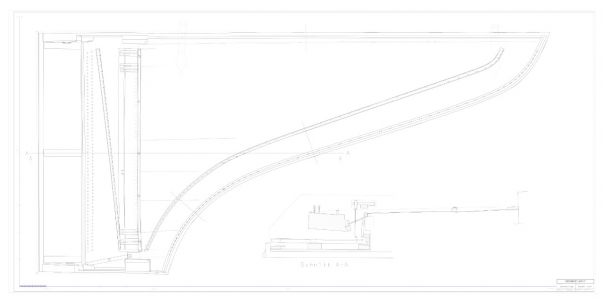 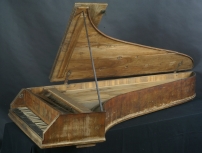