The English organ culture started almost from zero after the restoration of the Stuart monarchy. The strict Puritan Cromwell regime had banned the organ from worship, most of the instruments had been destroyed during and after the civil war anyway, with only a few older organs, mostly dismantled or spent in private houses surviving. The need for new organs was immense in the decades after 1660. Two immigrants and outstanding masters of the profession, Renatus Harris, born in France from a family of English organ builders, and Bernhard Schmid, called Father Smith, from the vicinity of Halle, found an almost inexhaustible field of work.

English organs of the 17th and 18th centuries differed in some details from instruments on the continent, but they show some striking similarities with northern French organs (especially from the regions along the coast) both in the façade design as well as in the absence of a pedal even with two- and three-manual instruments (rather rare in France, but common in England). The composition of stops seems a bit Italian though, because in addition to the expanded sequence of diapasons (8'/4'/3'/2' "Open diapason / Principal / Twelfth / Fifteenth") there are only a few registers of other types - the "Stopped Diapason," sometimes also a "flute", the "sesquialtera" and one or two reeds. The occasional "cornet" and the reeds are committed to French models (such as the "Cremona", from French "Cromorne"), but the extension of the manuals often down to F', or swells, are reminiscent of Spanish organs.

Smith and Harris were already considered as models for the organ building for subsequent generations by their contemporaries, and their style was cultivated well into the 18th century. In May 1684, Smith and Harris competed in an unique and curious event, the "Battle of the Organs" in the Inner Temple Church in London. The municipality had awarded contracts for an organ to both organ builders, with the condition that the instrument that had the greatest number of excellencies should be purchased. The finished instruments were to be performed by the best organists in London. Emotions were running high, and the night before the last competition, Harris' supporters were said to have cut open the bellows of his competitor’s organ. Smith ultimately won, not the least also by the playing of two of the most important organists of his time, Henry Purcell and John Blow, who preferred his instrument, but the decision was not made until 1688 and Smith received the astonishingly high sum of £ 1000 for his instrument.

The early recognition of the typification of the English organs may have contributed to the later handling of them: Probably nowhere else in Europe instruments "migrated" so often from one place to the next, case and instrument sold separately, old instruments sold into new cases, new instruments into old cases, positive and main organ to different places, single ranks separately moved elsewhere etc.- the quality of an organ builder proved not the least in the permanence of his work under such devastating conditions and this led to a re-use of old organs, whole or in individual components that lasts for centuries now. Organ cases of the 17th and 18th centuries are even more rare than organs themnselves (in contrast to other countries!), because of the frequent 19th century "restorations" of older church rooms to a "purely Gothic" style.  Later additions, like organ cases of the 17th or 18th century were perceived as unfitting, and were smashed. 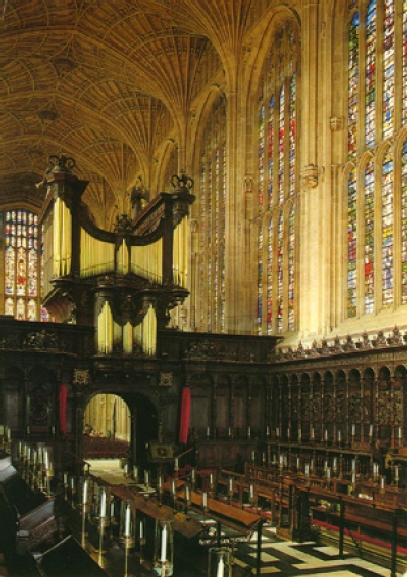 Another peculiarity of English organs is the choice of the organ site. While in Catholic and Protestant churches in continental Europe the choir screens between choir and nave were largely demolished, the Anglican Church kept a considerable number, thus preserving one of the traditional and acoustically most favorable locations for the organ in the center of the church volume. A choir screen organ required the case to show two fronts, but helped to achieve an impressive sound effect even with a relatively small number of stops.