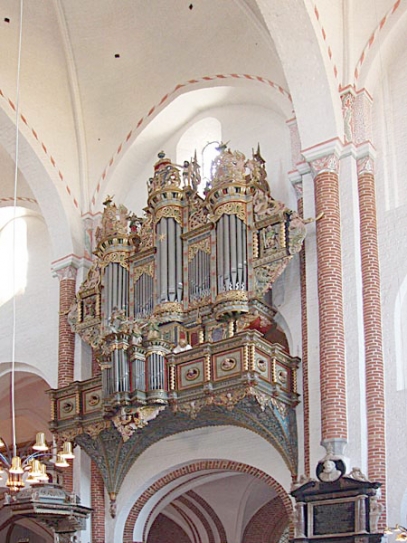 State of presentation: The  instrument' s outward appearance dating back to the 16th and 17th centuries match its inner state only in part. The parapet organ and the most visible principal pipes and some fundament stops date back to the mid-17th century but later changes have reduced the historic sound elements to a great extent.

Roskilde cathedral, about 30 km west of Copenhagen is a monument of danish history; since the early 15th century Roskilde is the main burial site for Danish monarchs.In 1995 it has been listed a  UNESCO World Heritage Site.

the 17th century organ making in Denmark was heavily influenced by Dutch and German organ makers:

The history of the Roskilde organ is determined by two significant periods, first from 1554 and the enhancement one hundred years later, the second after the decisive changes of the 19th century including the reconstruction in 1988-1991.

History of the organ