The Dutch church organ has been characterised by a remarkable tendency towards gigantomania since the 16th century, until well into the 18th century the largest organs in Europe were built in the Netherlands. This often seemed all the more astonishing, as the organ hardly played a role in the service of the Reformed Church. The dissolution of this apparent paradox lay in the fact that the church organs had traditionally been commissioned and financed by brotherhoods or city congregations. Even when the furnishings of the church rooms were removed during the Reformation and iconoclasm, the fact that the organs strictly were no church property prevented their destruction. On the contrary, a competition between the economically prosperous cities of the Netherlands began over the 17th century to house the largest and most representative organ works within their walls, to employ the most renowned organists and to record the greatest number of their concerts. The fame of Jan Pieterszoon Sweelinck and his numerous students extended far beyond the Netherlands.

Another characteristic of Dutch organs is their growth over several generations. Radical renovations were exceptions, a succession of extensions over several centuries rather was the rule. In many organs of the 17th and 18th centuries, large parts of their predecessor instruments of the 16th century were included. The often monumental organ cases offered sufficient space for several phases of expansion, as already in the 16th century there was an ambition to build organs with 16' principals in the main organ and (if possible) 32' principals in the pedal - it could not get much bigger anyway.

The wealth of ranks of these instruments was as proverbial as their external size. This unique experimental field for new sounds in organ building, and from there ideas and methods of construction, influenced many other European countries. 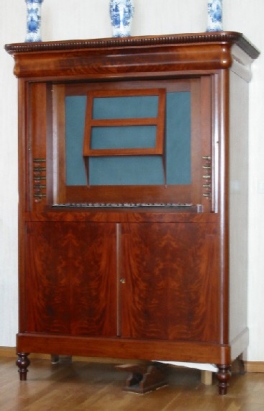 Small organs could serve a variety of purposes, for example as basso continuo instruments or (portable) processional organs. In some regions of Europe, however, independent small organ types developed for use in private houses, perticularly the Netherlands and Central Switzerland, both regions with a high reformed proportion of the population. The organ played only a minor role in the ecclesiastical liturgy there, if at all, true to the negative attitude of the reformers Zwingli and Calvin towards the "devil’s bagpipe". In affluent bourgeois and peasant houses, however, a house organ was considered an attractive symbol of status and was valued as an accompanying instrument for domestic devotion, but also as a keyboard instrument as such and as a general bass instrument for ensemble music.

Characteristics of such house organs were a somewhat reserved sound disposition with reduced high pipe rows, but multiple 8' stops, in order to offer options for accompanying purposes, but also divided sliders for treble and bass in order to provide differing sounds for the two hands. 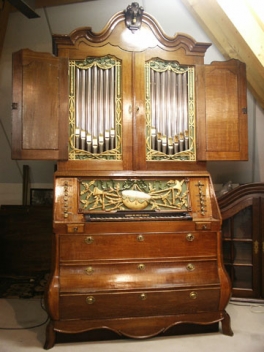 These instruments usually possess one manual and between three and six, rarely up to ten stops, the composition of which showing that these are organ types with their own characteristic features. As a rule, such instruments have a height and width of about two and a depth of about one and a half meters for use in living rooms, but also in schools. They apparently served as an accompaniment and solo instrument to secular music as well as to domestic devotions.

Dutch house organs show a certain diversity in the shape of cases, number of registers and manuals. Some of the larger instruments could even contain two manuals and more than ten stops. Instruments of this size required cases of corresponding dimensions and no longer differed significantly from smaller church organs elsewhere. The cases of smaller instruments were often shaped like the fashionable upper-class furniture of that era, the cabinet, the slant top desk and the secretary desk. Its appeal consisted in accommodating all the components of an organ within a very limited space inside a piece of furniture hardly or not at all recognizable as an organ. In a small slant top desk type there was space for only about two to four ranks, while a larger desk with an attachment or a relatively voluminous cabinet made it possible to install maybe about six to ten ranks. The usual furniture elements, such as drawers etc., were indicated, but usually only dummies. Existing front pipes were usually mute, because there was no room in the furniture for long conducts. 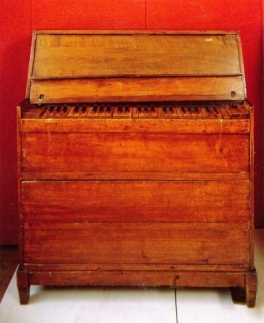