Our resarch is oriented at the present standards following ICOM and CIMCIM [1]. 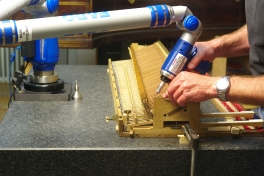 At a first stage dimensions of an instrument and its individual parts are surveyed and  recorded, including all traces of manufacturing, repair and restoration processes, aging and damage.

This forms a basis for the drawing of plans which enable hypotheses about any original or concept state of an instrument based on the documented traces of manufacturing or changes. Only then any reconstructions of eventual concepts can be based on a  solid data fundament. These also can be realised on a virtual basis without any modifications or alterations of the original instrument. 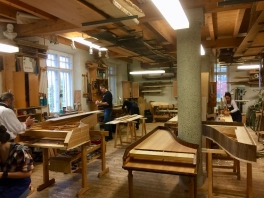 These plans and the recorded work traces allow the production of a replica within a separate  re-engineering process.

The result is a fac-simile replica based on scientific data with permanent control of its manufacture that can for itself form a basis of future research. 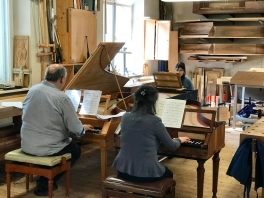 A fac-simile replica permits investigation of playing and sound characteristics etc. in theory and practice, without any tampering with the historical original instrument, thus allowing the preservation of an original as a memorial and historical source for future generations, and offering a research and interpretation fundament unaffected by the wear and tear of the original as well as serving as a prototype and reference for further fac-simile replicas, in this way forming a reference for enduring aging processes.