Befundgeführte Rekonstruktion: Anton Walter, Wien ca. 1782/ Our reconstruction based on our documentation

Documentation and scientific reconstruction of a grand piano

The original unsigned grand piano c1782 shows many chararacteristic elements of the early instruments by Mozart's piano builder Anton Walter. It belongs to the collection of musical instruments of the Technisches Museum Vienna (TMW). The instrument was documented by photographs and drawings in its pre-restoration state in the 1990s, before we founded our institute. During the same time a reconstruction was begun.

This instrument has a modified action which might represent the first version of a specific innovation by Anton Walter. Traces of the special wooden hammer capsules could be found in another early Walter instrument in Eisenstadt, but were still present only in the instrument in TMW. The Eisenstadt grand is closely resembling Wolfgang Amadé Mozart's grand acquired by him when he moved to Vienna, for playing at his home as well at public concerts. Mozart's instrument (now in Salzburg) was, however, re-worked by Walter when Constanze Mozart gave it to her son. It can be assumed that Mozart's grand in his lifetime has a similar sound and touch to our replica of the THW grand which might have resembled the original state of Mozart's own.

Thus this instrument offers an unique approach to Mozart's ideas of piano sound in his Viennese period and a special source of inspiration. 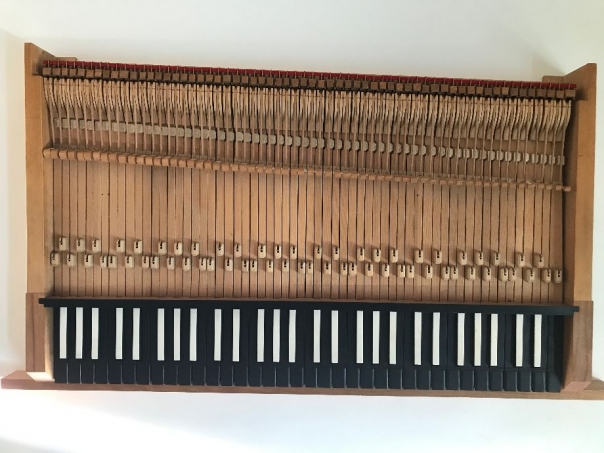 The specific action of the THW grand

Walter modified Stein's action with escapement and changed a considerable number of details already in his early years. His obvious intention was an overall increase of volume and a wider range of development of sound in the louder range. A Stein action consists of c15 different parts per key, Walter's of 18, in sum 915 parts (Stein) as opposed to 1098 (Walter):

* Since these guides are very carefully made and add reliability to the action if played with a potentially increased force they are considered part of the action components here. When Walter used supplied brass capsules in his later instruments, the production of a piano action was simplified again.

Important details of the action of the TMW grand are the specific shapes of the wooden capsule and the beak. No other instrument with that kind of action whether by Stein or Walter or any other has been described yet. 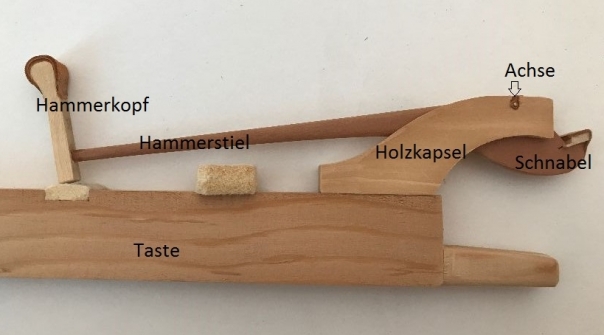 The capsule is glued to the the rear end of the key and thus rigid. The specific "overhang" shape brings the "belly" of the beak in contact with the cloth cover on top of the key guide frame. When falling down after striking the strings and key release this "belly" acts with the cloth cover to arrest the hammer motion and prevent it from bouncing up again. So Walter did not require a separate hammer check. 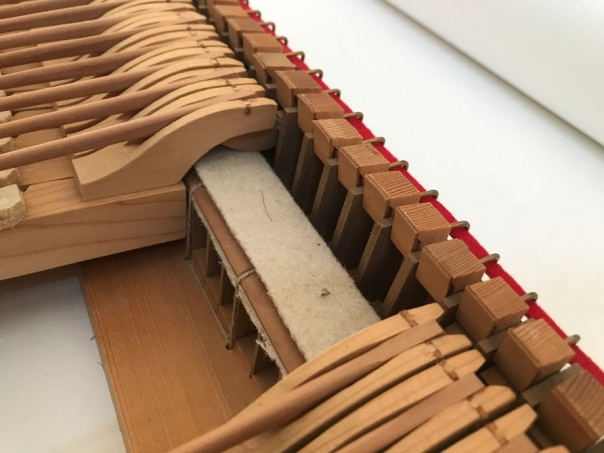 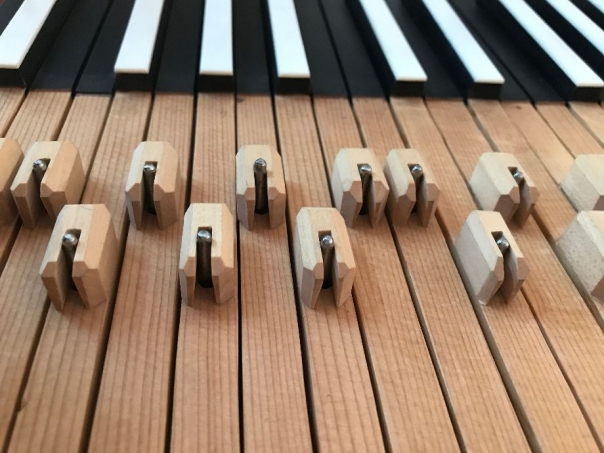