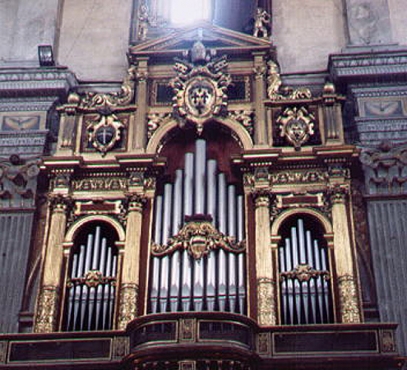 The basic patterns of the Italian organ designs emerged in the course of the 16th century and remained well into the 19th century. There were some regional differences: the "Roman façade" (in the former Papal States; present-day Central Italy), for example, visible in the organ of Rome, San Spirito in Sassia (design attributed to Antonio da Sangallo or Andrea Palladio), is based on the design of an ancient Roman triumphal arch and goes back to the treatise Architettura by Sebastiano Serlio. Therefore this architectural element made of a central round arch, flanked by two rectangular openings, also bears the name Serliana. The Venetian façade in Venice and its Terra ferma (today’s Northeastern Italy), on the other hand, usually has a single pipe field in a round arch.

Flat organ façades are typical all over Italy. The front pipes all stand in a row in a few fields, usually framed by one or more round arches. As a rule, the case front is treated as an architectural element (such as the "Triumphal Arch" or a church façade divided into several floors). The internal technical structure of the organ had little influence on the design of the case; but since many Italian organs consisted of only one manual with a few additional pedal stops anyway, there was hardly any reason for this.

In terms of sound design, Italian instruments also differ significantly from those of the transalpine neighbours. An Italian organ has a large number of open diapason stops from 8', in large instruments from 16', up to 2' and beyond, preferably in separate pipe ranks. Ranks of 1', ½', or even 1/4', hardly found in other countries (if ever, only within compound stops such as mixture or cymbal) are not uncommon in Italy. However, these ranks always "break" to the lower octave when c5 (the traditional "plafond" of the organ) is reached. Other than that, Italian organs of that age have only a few further stops: often an undulating diapason in the treble ("voce umana" or "fiffara"), as well as up to three flute registers, one of them as a fifth. A trumpet (rather a "tromboncino", a trumpet regal) or other reeds, or any string stops are extremely rare. Usually Italian organs had only one manual; the pedal was usually attached permanently or had, at most, a single stopped 16' to give more volume to some occasional sustained bass notes.