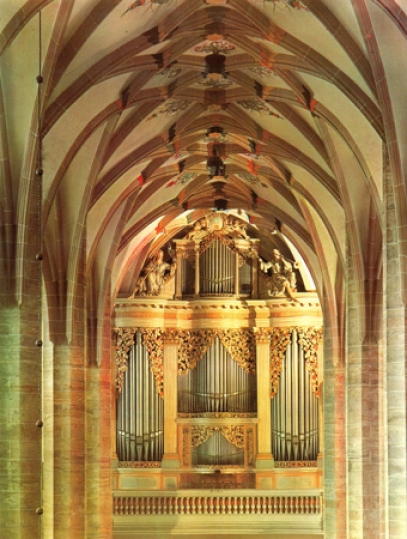 State of preservation: largely intact, including choir pitch tuning. Quintadehn 8' and reeds replaced in the 1930; restorations 1981-83 (Kristian Wegscheider, then Jehmlich), and 2009-10.

The organ for Freiberg cathedral was Gottfried Silbermann's first big contract and became a model for his own later organs in Dresden as well as for his pupils. His constructions without a parapet positive set an example for later instruments in Saxony. Gottfried Silbermann adapted  french reed and cornet stops as well as single harmonics ranks from his older brother Johann Andreas. Also remarkable is his later change of name of the old rank „Krummhorn“ (still in Freiberg) to then modern „Chalumeau.“ The "Viola da gamba" found its way to Silbermann via Bohemia and Silesia. As a contrast to north and central German organ makers his pedal is a mere bass keyboard without high melody stops.

Silbermann constructed his organs in a sort of modular system from small one manual instruments without a pedal to big three-manual organs. His pipe measures were more or less standardised as well, ranks of the same name interchangeable. between instruments. This simplified manufacture saved time and permitted ranks being made in store in theory. Thus Silbermann did some major steps from handicraft organ making to a sort of early industrial production.