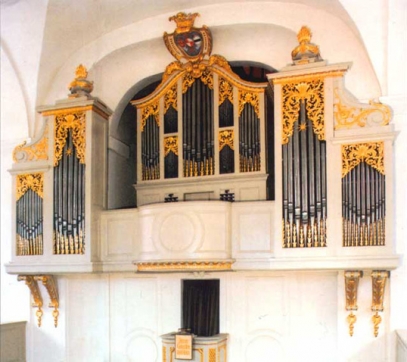 The first organist of this instrument was Johann Lorenz Bach (1695-1773) of the Schweinfurt branch of the family, nephew and pupil of Johann Sebastian Bach. Johann Lorenz received his first musical education outside his home presumably in Ohrdruf in 1712/13 from Johann Christoph Bach (1671-1721), Johann Sebastian's older brother, followed by several years with Johann Sebastian Bach in Weimar for getting further education to finally become „in der Vocal und Instrumental Music geübt und qualificirt“; also working as a copyist he probably also knew numerous organ works Bach had written up to that time. In 1718 Johann Lorenz Bach was called to Lahm as cantor and school teacher where he organised the church music until he died. Only few of his compositions are known and preserved.