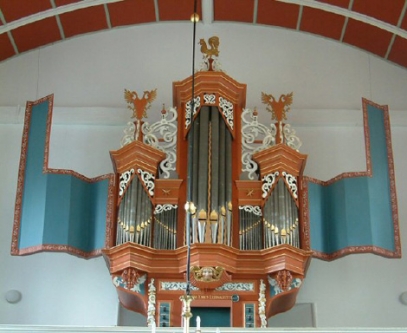 State of preservation: Original, except for two stops. Restored in1956/57 .

The name of the organ maker as well as the time when this instrument was made is still a mystery. It is assumed to have been made c. 1660.

As common with many instruments of that time in northern Germany the Uttum organ was built using older pipes wherever possible. The ranks Quintade 16' and 8' as well as Gedackt 8' have been made of metal with a high content of lead and appear to be  late gothic. The placement of 2 big pipes in the trapezoid central tower is an uncommon design feature.